The Joke’s On Us: 5 Reasons to Not Watch Jersey Shore

“Nicole was all about liquor and partying and ass in the air and it was like she doesn’t have respect for herself.” – Mike

“The best way of getting back at a girl is to have sex with her.” – Vinny

“Sam and Ron were so reckless towards each other, I’m surprised no one ended up in the hospital or arrested.” – Jenny

MTV just turned 30, and as one of the most influential popular culture mediums in the world, I can’t help but take a look at what has now become the channel’s biggest phenomenon, Jersey Shore.

Since its debut in 2009, the show has been a massive success, scoring record ratings, broadcasting in over 30 countries, spawning a popular UK version, and a reported handful of spinoffs. Cast members now make upwards of $100,000 per episode. The upcoming fourth season took the cast to Florence, Italy. It’s all in good fun, right?

All I can plead from the American people is, please, please, stop watching.

The joke is no longer Mike’s gratuitous ab-showing, or Snooki’s gravity-defying hairpoof. The joke is dreadfully, tragically on us. With a lazy mix of violence, alcoholism, public indecency and promiscuity, MTV is slipping a dangerous message into the pop cultural terrain.

Take Shore favorite “The Situation”, who thrust the Jersey slang of “GymTanLaundry” and “fist pump” into the national lexicon. He will stop at nothing to bring a woman back to ‘smush’ her. Women deemed ugly are immediately called ‘grenades’, and the word is often thrown at girls who hinder the guy’s ability to close the deal. Navigating Jersey nightlife, for Mike and the boys, is like a battlefield, with the single, shallow goal of sex. Beauty and sexuality, clearly, are the only value that women have to these men. Did you really think that all the gym, tanning, and laundry-ing was for nothing? Aside from the obvious misogyny, I can’t help but feel that this is doing young viewers a huge disservice to their still-forming opinions of masculinity, power and gender perceptions.

And even what began as a respectful affection between Sammi and Ronnie, ended up playing out as one of the most toxic, yet textbook examples of an abusive relationship. From episode-to-episode, season-to-season, the two fight constantly, screaming and throwing things, until cast members (and crew) have to intervene. MTV’s dutiful following of the pair —including after-shows and reunion specials—paint their behavior as ‘complicated’ and ‘crazy’. No, it’s abusive, and if MTV truly cared about the well-being of the women who watch their show, they would’ve pulled Ron out of the cast the first time he shoved Sammi. 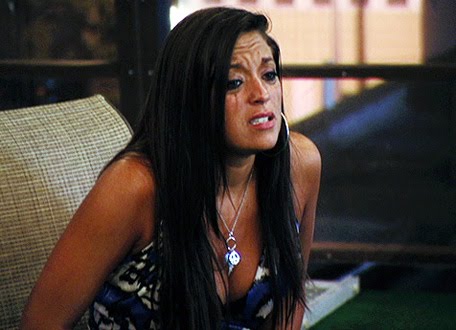 But wait! MTV did have a moment, however brief, of clarity. At the end of a certain episode, a short blurb flashed on the screen for loveisrespect.org, an organization and online resource that details the telltale signs of an abusive partner. Missed it? Probably because it was played in a context completely unrelated to domestic abuse, but instead after the now-infamous scene of Snooki being punched point-blank by a complete stranger. While MTV blocked out the actual screenshot, the message was clear: reckless, sensationalized violence has a place on the Shore. In the context of the show, where punches are thrown to start and end confrontations, it is particularly easy to forget just how horrific this scene is.

And while it may not always happen in bars with strangers, it happens inside homes, to wives, mothers, and to children. Violence rips families and relationships apart. We are not a society that rewards erratic, dangerous behavior, but in the Shore world, it equals camera time. How is this shaping the way youth view violence? If the Shore rewards, what does that mean for real-life witnesses of violence and abuse? At the very least, Jersey Shore flaunts a distanced, indifferent attitude towards impulsive and destructive behavior.

The most tragic? The women on the show aren’t any different. There is no moral anchor, male or female. Repeated scenes of slapping and hair-pulling desensitize viewers, sure, and sadly, paint the behavior for women as normalized, acceptable means of solving conflict. And while the boys have their GTL, the girls have fake boobs, hair, and nails, and equally promiscuous attitudes. For these eight castmembers, male chauvinism is answered solely with female sexploitation. It is a vicious cycle.

In the early 90’s, MTV ushered in a relatively thoughtful and provocative reality series for its time, The Real World. The youthful mix of personalities and experiences often brought nuanced discussions of sex, racism, and gender to the forefront, championing issues that were directly impacting young viewers’ lives. It still stands as one of MTV’s finest contributions.

Jersey Shore is it’s absolute worst. So I’m changing the channel. I hope you’ll join me.

Kathryn recently graduated from Saint Mary’s College of California with a BA in English, after completing a semester abroad in Oxford, England. Prior to her internship with Miss Representation, she interned for her local newspaper, the Monterey County Weekly. She received nationwide attention for her article on juvenile justice in Santa Cruz County while writing for the UC Santa Cruz student-run paper, City On a Hill Press.